When I first heard about the project of a reconstruction of an Oberstimm-vessel by the Friedrich-Alexander-Universität Erlangen I grew rather excited. I contacted the initiators and we agreed that I would conduct research on ways and means on antique ship-painting, and i successful, the insights could be applied on the reconstructed boat.

Roman warships were colourful, there are plenty of unambiguous sources both by authors such as Pliny and Vegetius, and a trove of images from contemporary mosaics and frescoes. Ernst Berger's (1904) hypothesis was that a gradual increase of linseed oil within the mix of encaustic paint eventually lead to modern-day oil colours; this proved invalid as the drying periods are ever extended and the paint tends to show cracks and even flake off.

"Burning in" proved to be better: pure wax, mixed with pigments, heated with fire after application, resulted in smooth, almost crack-free surfaces.

But then I hit upon the excavation reports and analysises of the Pisa ships – the famous "Nave C" showed residues of an encaustic paint, consisting of wax and resin. I switched my research to these components (omitting oil) and found splendid results: the colour dried quickly, is 100% waterproof, shows no cracks whatsoever and is easy to handle.

Things grew more interesting when the research, made with samples of 10 gramms, were to be reproduced using 10 kgs. But all went well. Resin, liquified with turpentine, and wax was heated in twin-layer glue pots and mixed with pigments, then applied with brushes (just as Pliny said). The pigments used were burgundy ochre, as this was found at the Nave C as well as the "Jesus boat" from the Genezareth sea, green earth and yellow ochre. The visual concept was made after an image from the porticus of the temple of Isis at Pompei, design elements after images from Traian's column.

The paint proved to be well apt for painting ships – it smoothes uneven surfaces such as nail holes, cracks in the wood and other rough spots. Thus, it's use is not just colouring, but also sealing up the vessel, just as several text sources indicate.

Works on 23 square meters of ship took about a week, with 2-3 people preparing paint and painting at a time. 5 kg of wax were used, as well as 3 kg resin and 5 litres turpentine. Regarding pigments, 1,2 kg burgundy ochre, 1 kg gold ochre and 2,5 kg green earth came to use, also some gramms of kremer white and vine black. 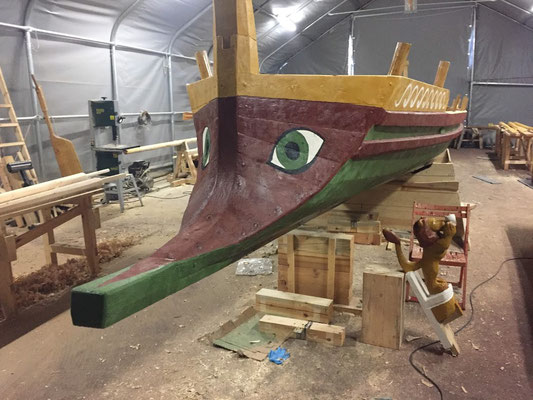 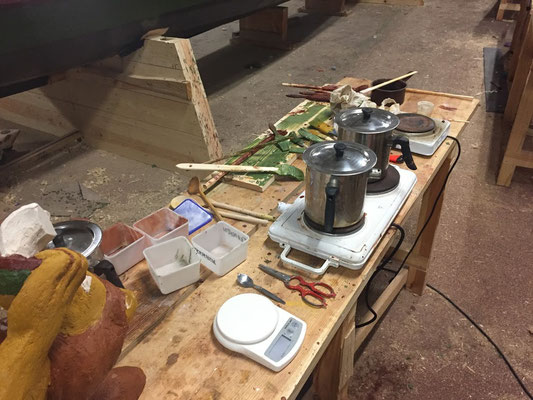 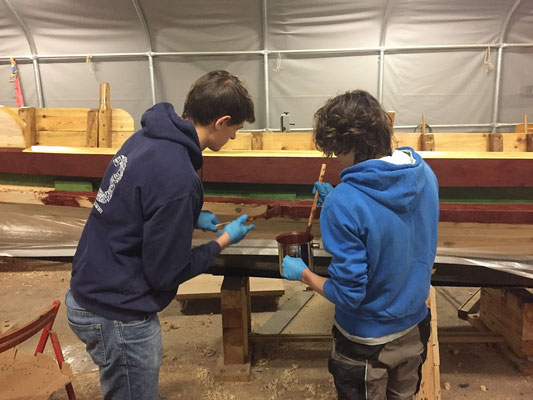 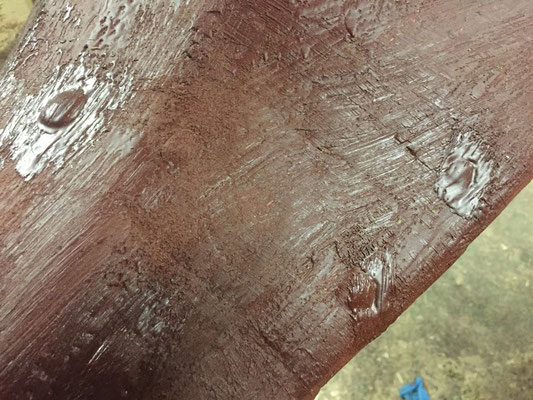 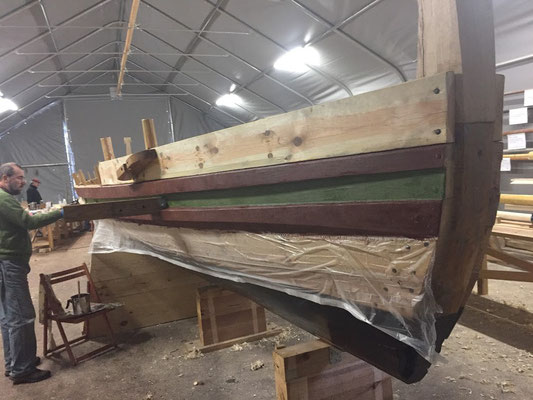 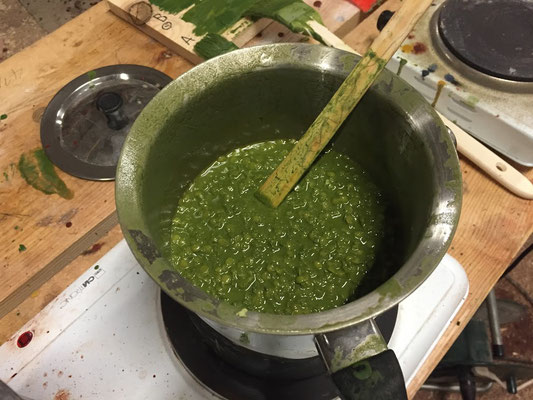 The paint was applied in the month of February, during which the average temperature did not rise above -10° C. The tent, where the ship was built, was heated to ca. +15° C during the day, at night, temperature sunk to -15° C very quickly.

During the first test runs in the Dechsendorf Pond at the end of March, temperatures rose to +20° C instantly, with additional full sunshine. The ship warmed and the paint started to melt, specially the red hematite (iron oxide) started to seep. The project lead cancelled the experiment and replaced the paint with a mixture containing modern ingredients; I was cut out from further information.

IMPROVEMENTS ON THE RECIPE

With the cancellation of the "FAN" experiment, I continued tests with resin, wax and sometimes even linseed oil. The results are the following:

THE IMPORTANCE OF LEAD WHITE

One further information I got through Joy Mazurek of the "APPEAR" project relates to the chemical properties of Lead White. This pigment has a siccating effect, turning every paint into a fast-drying, hard coat of paint, and the lack of Lead White (or other siccating substances) in the paint of "FAN" probably led to the disastrous effects during the very hot summer of 2018.

Any further experiment with antique wax paint will have to take this effect into consideration. There are non-toxic siccatives available which will have to step in for Lead White and will eventually lead to  "Ersatz Lead White", the closest approximation we will get to the paint used for the ship paint of antiquity.

To be honest, I never thought researching literally drying paint would be so exciting.